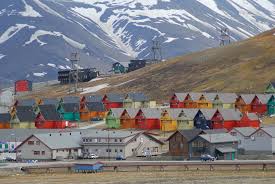 The Svalbard Islands. The Svalbard Islands are located in the Arctic Ocean, halfway between Norway and the North Pole. Here you will find untouched arctic wilderness.  Svalbard formerly known by its Dutch name Spitsbergen is a Norwegian archipelago in the Arctic Ocean.    Located north of mainland Europe, it is about midway between continental Norway and the North Pole.   The largest island is Spitsbergen, followed by Nordaustlandet and Edgeøya.

“The archipelago is not part of any Norwegian county, but forms an unincorporated area administered by the governor appointed through the Norwegian government.    Other settlements include the Russian mining community of Barentsburg, the research station of Ny-Ålesund, and the mining outpost of Sveagruva.   Svalbard is the northernmost settlement in the world with a permanent civilian population.”   “Other settlements are farther north, but are populated only by rotating groups of researchers; e.g. Alert, Nunavut—the northernmost year-round community.”

By the 1890s, Svalbard had become a destination for Arctic tourism.    Coal deposits were found and the islands were being used for Arctic exploration.   The first mining was along Isfjorden by Norwegians in 1899.

Longyearbyen is the largest settlement on the archipelago.   The town has a hospital, primary and secondary school, university, sports center with a swimming pool, library, culture center, cinema, bus transportation, hotels, a bank, and several museums.   The newspaper Svalbardposten is published weekly.

Ny-Ålesund is a permanent settlement based entirely around research.  Formerly a mining town, it is still a company town operated by the Norwegian state-owned Kings Bay.   While there is some tourism, Norwegian authorities limit access to the outpost to minimize impact on the scientific work

Svalbard Airport, Longyear, located 3 kilometres, 2 miles, from Longyearbyen, is the only airport offering air transport off the archipelago.   Scandinavian Airlines has daily scheduled services to Tromsø and Oslo.   Low cost carrier Norwegian also has a service between Oslo and Svalbard, operating three or four times a week; there are charter services to Russia.   Lufttransport provides regular corporate charter services from Longyearbyen to Ny-Ålesund Airport and Svea Airport for Kings Bay and Store Norske; these flights are not available to the public.   There are heliports in Barentsburg and Pyramiden, and helicopters, which are frequently used by the governor and the mining company Arktikugol.

“The climate of Svalbard is dominated by its high latitude, with the average summer temperature at 4 to 6 °C (39 to 43 °F) and January averages at −16 to −12 °C (3 to 10 °F).[94]   The North Atlantic Current moderates Svalbard’s temperatures, particularly during winter, giving it up to 20 °C (36 °F) higher winter temperature than similar latitudes in Russia and Canada.   This keeps the surrounding waters open and navigable most of the year.   The interior fjord areas and valleys, sheltered by the mountains, have larger temperature differences than the coast, giving about 2 °C (4 °F) warmer summer temperatures and 3 °C (5 °F) colder winter temperatures.   On the south of Spitsbergen, the temperature is slightly higher than further north and west.   During winter, the temperature difference between south and north is typically 5 °C (9 °F), and about 3 °C (5 °F) in summer.   Bear Island has average temperatures even higher than the rest of the archipelago.[95]”

In addition to humans,  there is the Long-tailed skua,  four primarily terrestrial mammalian species.  The Arctic fox, the Svalbard reindeer, polar bears, and southern voles, which are found only in Grumant.    There are fifteen to twenty types of marine mammals, including whales, dolphins, seals and walruses.

“Polar bears are the iconic symbol of Svalbard, and one of the main tourist attractions.   While protected, anyone outside of settlements is required to carry a rifle to kill polar bears in self-defense, as a last resort, should they attack;[100]   Svalbard and Franz Joseph Land share a common population of 3,000 polar bears, with Kong Karls Land being the most important breeding ground.
“The Svalbard reindeer (R. tarandus platyrhynchus) is a distinct sub-species; although it was previously almost extinct, it can be legally hunted (as can Arctic fox).[97] There are limited numbers of domesticated animals in the Russian settlements.[102]”

There’s no regular boat transportation between the Norwegian mainland and Svalbard.
The easiest way of getting to Svalbard is by taking a plane.  There are daily flights from Oslo to Longyearbyen via Tromsø, check to see when.

Both SAS and Norwegian have flights to Longyearbyen.   Norwegian has direct flights from Oslo, while SAS have both direct from Oslo or via Tromsø.

From Oslo the flight time is 2 hours and 50 minutes, and from Tromsø it is 1 hour and 40 minutes.  For booking and more information, please contact SAS or Norwegian.

The islands’ airport is Svalbard Airport Longyear.
Please note that there are no roads between the settlements.   Internal transport for visitors is either by snow mobiles (winter) or boat (summer).