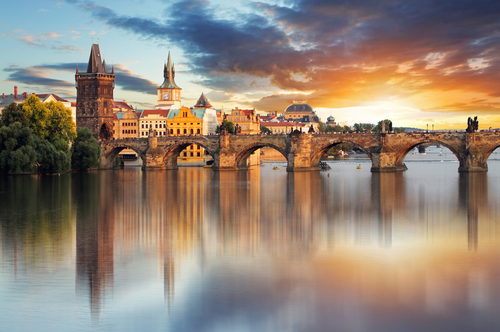 And believe me, the city of Prague has this uncanny ability to sweep you off your feet with its breathtaking beauty. The charming cobbled streets of the Malá Strana, the riveting history of the Josefov, to the cozy cafés nestled on the first floors of several buildings downtown, Prague is a delight to behold.

So let’s get on to explore all the amazing places of interest around Prague, one gorgeous attraction at a time.

Yes, yes, I do know what you’re thinking. Why feature this twisted structure upfront, when there’s a whole lot of divine architecture spread all over Prague? This is precisely the reason why. The Dancing House is one structure that makes its presence felt among the Baroque, Gothic, and Art Nouveau excesses that surround it. Built on a plot that fell victim to bombings in WWII, the building was the brainchild of then Czech president, Václav Havel, and was designed by Vlado Milunić and Frank Gehry.

One of Prague’s swankiest restaurants, Céleste sits on the top floor of this building. It’s quite over-priced, but if you take the stunning riverfront view into consideration, you’ll just forget all about the bill.

Every European town has a main square that used to double up as a medieval marketplace, and Prague is no different. The Old Town Square can trace its origins as far back as the 12th century, when it used to be the town’s center. This is a perfect place to be, whether you’re an architecture fan or not, simply because there is so much beauty all around you. This is where you’ll get to see the Old Town Hall Tower & Astronomical Clock, Týn Church, and St. Nicholas Church―all of which are Prague’s best attractions.

At the center of the Old Town Square is the Jan Hus statue, who was a Czech priest, philosopher, reformer, and master at Charles University in Prague. He is considered to be the first Church reformer, having lived before Martin Luther and John Calvin.

The 600th anniversary of the astronomical clock (built into the Old Town Hall Tower) was celebrated in 2010, which should give you a fair idea about the historical and cultural significance of this object. In order to experience the clock’s intricate construction, join the crowd in front of the tower to watch the procession of the Twelve Apostles. Every hour, a small trap door opens and Christ marches out ahead of his disciples, while the skeleton of death tolls the bell to an imposing statue of a Turk. This, by far, happens to be one among the many great things to do in Prague.

The Town Hall Tower is truly one of the most memorable structures in Prague. You can ascend the tower for a fee, and enjoy stellar views of the entire Old Town area on a clear day.

Founded by the Jesuits, the St. Nicholas Church lies at the center of Lesser Town Square, and is the largest of Prague’s churches. The design of the church is credited to the father and son duo, Christoph and Kilian Ignaz Dientzenhofer. As beautiful as it is from the outside, the interior of the church is decorated with statues, paintings, and frescoes by leading artists of the time. Particularly eye-catching is a fresco of the Celebration of the Holy Trinity by Franz Palko, which adorns the 230 feet high dome.

For a fee, visitors can climb the tower during the day and experience amazing views over the Lesser Town (Malá Strana), and across the Vltava River over to the Old Town.

This bridge is as ancient as they come, as it was the only means of crossing the Vltava River until 1841. It is a pedestrian route, connecting the Prague Castle with the Old Town. Both entrances to Charles Bridge are marked by towers―the Old Town Bridge Tower and the Lesser Town Bridge Tower. Visitors coming here can enjoy some spectacular views of Prague. Charles Bridge is mostly buzzing with activity throughout the day―you’ll find street artists, musicians, and even a jazz band, all of which are quite entertaining. But if you’re looking for a more romantic setting, do pay a visit in the early hours of the day.

The construction of this bridge began in 1357 under the authority of King Charles IV, and concluded sometime in the early 15th century.

The Prague Castle is the largest medieval castle in the world, and the city’s premier tourist attraction. From Bohemian Kings to Roman Emperors, to Czech Republic Presidents, they’ve all ruled from this very castle. The complex is huge, and includes the St. Vitus Cathedral, viewing towers, museums, art galleries, cafés, a monastery, and the Golden Lane, along with three courtyards.

A Changing of the Guard ceremony takes place every hour at the front gates of the Castle. The ceremony at noon includes some fanfare and banner exchange.

It’s called the mini Eiffel Tower, and with good reason. The Petrin Tower may not match the Parisian attraction in terms of height (it is merely 200 feet tall), but it sits on top of the Petrin Hill, which is a good 1040 feet high. The tower is surrounded by beautifully landscaped gardens, which also include the Štefánik Observatory and the Mirror Maze. You will be charged a combined fee to enter all three attraction on Petrin Hill.

The tower is open 10 am to 10 pm from April to September, 10 am to 8 pm in March and October, and 10 am to 6 pm from November to February. Please note that timings are subject to change.

The Old-New Synagogue, situated in the Jewish Quarters is the oldest active synagogue in the European continent. The construction of the structure was completed in 1270, making it one of the earliest examples of Gothic architecture in Prague. Most of the Josefov, or the Jewish Quarters area falls under the auspices of the Jewish Museum, and includes six synagogues, the Jewish Town Hall, and the Old Jewish Cemetery. The Nazi occupation of Prague left surprisingly little damage to the Josefov area. It was understood, however, that the Nazis did so in order to convert the area into an “exotic museum of an extinct race”.

The Josefov area underwent considerable changes in structure. Its current appearance dates mainly from the period between 1893 to 1913.

The historic Estates Theater is Prague’s oldest, and by far one of the finest in Europe. Europe’s most revered artists and conductors, including Carl Maria von Weber, Angelica Catalani, and Nicolò Paganini have performed to enthralled audiences here. But of course, the theater’s Mozart connection remains a major crowd-puller. In 1786, the Marriage of Figaro was first performed in Prague at the Estates Theater, which was followed by the world premiere of Don Giovanni.

Estates Theater is where Wolfgang Amadeus Mozart conducted the world premiere of his Don Giovanni in the year 1787.

The Municipal House is located at a walking distance from the Old Town Square and Wenceslas Square. The building has quite an arresting exterior, with gorgeous stained glass windows, frescoes, and delicate stonework. Once inside, a huge marble staircase takes you to the imposing Smetana Concert Hall. The Municipal House boasts of a few good restaurants, and even plays occasional host to exhibitions and ball dances.

Municipal House is home to the Czech National Symphony Orchestra.

Hard as it is to include all the places of interest in Prague, we’ve tried to feature as many as possible. It’s true that a single visit won’t do justice to the sheer beauty of this wonderful city. You’ve got to keep coming back, and keep exploring this Eastern European gem.