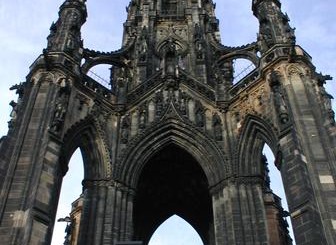 Edinburgh is located in Southern Scotland it is divided into two parts the Old Town and the New Town and is split by the Princess Street Gardens.  You will see green sunlit hills, rusty red crags and blue distant sea.  The Old Town has the Edinburgh Castle occupied by King Malcolm Canmore along with his Queen Margaret in the 11th century.  Here is the British army’s main base. Image courtesy of chrissies at freeimages.com

“The Camera Obscura a must see it is a 19th century device, which uses lenses and mirrors to throw a live image of the city onto a large horizontal screen.”

Real Mary King’s Close some of the royal exchange was built over the remains of Mary King’s Close, there are people in costumes that give tours through the 16th century townhouse and the plague that struck in the 17th century.  You do need to reserve a spot in advance for this.

Scottish National Gallery here you’ll find a collection of European Art from the Renaissance to post-impressionism from artists as Verrocchio, Pissarro, Monet, Turner, Gauguin, Rembrandt, El Greco and many more just to name a few.

Scottish Parliament Building this building was built on the site of a brewery and was officially opened in October 2005.  You can get a one-hour free tour of the building.

Palace of Holyroodhouse this palace is the royal family’s residence in Scotland, it was once the home of Mary, Queen of Scots.  The palace is closed from May to early July you will have to check the website www.royalcollection.org.uk for available dates.

Scotland’s major attraction is the Royal Yacht Britannia it was used by the British royals floating home when traveling to other countries.  It now sits in front of Ocean Terminal.

Edinburgh has many festivals if you are a festival going person than look up www.endinburghfestivals.co.uk.

Featured introduction photo on top courtesy of markicardy at freeimages.com