Facts about Pamukkale: The Cotton Castle of Turkey 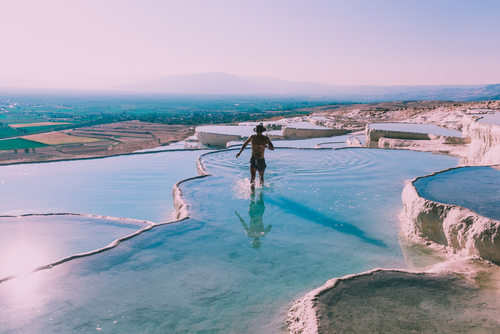 A visit to Turkey is deemed quite incomplete without a visit to the famous Pamukkale site. Located in the Denizli Province in southwestern Turkey, the ‘cotton castle’―as it is more popularly known―beckons tourists the world over for a visit to its pearly white landscape, doused with liberal amounts of turquoise pools. The city, simply put, is home to hot springs and terraces of carbonate calcium minerals (called travertines), which have been formed due to the flowing water.

Pamukkale (pronounced pah-mook-kah-leh) is called the cotton castle by literal translation of the word ‘Pamukkale’ in Turkish. The Turks call it the cotton castle because of the similarities that these white mountain slopes have with the cotton plantations that are cultivated in central Turkey. While the ruins of the Hierapolis city garner a lot of interest, it is the travertine pools and terraces that are the most famous.

Approximately 400,000 years ago, modern Asia Minor experienced a series of devastating earthquakes. This resulted in the shifting in the valley of the Menderes River (historically the Maeander or Meander) and caused for the thermal waters lashing out to the surface. The hot springs which were created, as a result of this phenomenon, began to flow down to the surface of the plateau with incredible speeds (hundreds of liters per second). While these flowed, they simultaneously began to evaporate in the sun, thus resulting in the formation of travertine terraces and fancy slopes, which were filled with turquoise water. Because the water was saturated with carbonated calcium, the sediments, when solidified, resulted in the formation of white crystalline surfaces, terraces, stalactites, and pools.

The History of the City

Pamukkale (also known as Hierapolis) is about 19 km north of Denizli and around 250 km east of Izmir. It was due to the attraction of the hot springs and the healing properties that led to the foundation of the Hierapolis city or the Holy city in 190 BC. The city is named after Hiera, the wife of Telephos, who was the founder of Pergamum.

The city was a thriving metropolis during the Roman era and was rebuilt several times following earthquakes. It was not totally abandoned until 1300 AD. Some of the ruins include a large amphitheater, a Nymphaeum fountain (which distributed water throughout the city), and the remains of the largest (ancient) necropolis in Turkey.

The Modern Valley in all its Glory

Approaching the site, a smudge in the hills in the northern direction is reminiscent of an open cast mine or a landslide―a closer look reveals the edge of a plateau which appears at least a hundred meters higher than the valley and everywhere you look, the expanse is covered by white travertine terraces and small pool-like basins filled with gleaming turquoise waters. The valley is 160 meters high, about 2,700 meters long, and 600 meters wide.

The Thermal Pools of the Valley

For thousands of years, an underground spring has poured out hot streams of water into the valley. As it has flowed down the mountainside, this mineral-saturated water has hollowed circular basins into the earth and the rich minerals have formed and coated these basins in smooth, dazzling-white calcareous rocks. The hot springs flow at a rate of 400 liters per second, and have a temperature between 36-38ºC, with a pH of 6. There are known to be 17 water springs in total, and the temperature ranges from 35ºC (lukewarm) to 100ºC (steaming hot).

The mineral content in the water is very high, and the water is used for the purpose of bathing and drinking. These hot springs are known to be a great source of health, which is why they have been used as a health spa for more than 2,000 years, and the water is used as a treatment for digestive maladies, neurological and physical exhaustion, dermatological, gynecological, and rheumatic diseases, and nutritional disorders, as well as to cure a number of diseases like asthma, strokes, high blood pressure, and skin and eye problems.

Pamukkale has a thermal pool known as the Sacred Pool. Due to an earthquake that hit the region, the remains of the ancient city of Hierapolis lay in the water of this pool, forming an underground museum. It is due to the significance of this that the thermal pool has been named thus, and for a small fee, one can even swim in the waters of the Sacred Pool.

Footwear is forbidden on the travertine terraces because of the fear of damage. The calcium carbonate that is deposited on the terraces is in the jell form, and it takes time to harden to form a part of the structure. Footwear raises the risk of damaging this jell before it has had a chance to harden, and can cause breakage and loss of calcium.

Along with the ruins of Hierapolis, Pamukkale was declared a World Heritage Site by UNESCO (United Nations Educational, Scientific and Cultural Organization) in 1988. Prior to this designation, the travertine terraces were in danger of being destroyed because of commercial development and neglect of the site. Several hotels were built atop the site, which led to obscuring the ruins. Along with that, wear and tear brought on due to the visitors’ footwear led to considerable damage to the pools and caused many of them to turn brown.

Thankfully, the efforts put in to protect this delicate, natural site have led to a positive change in the area. The hotels have since been demolished, and in order to maintain the pools’ natural white appearance, the access is tightly restricted. Water that is released from the spring is controlled and only distributed to a few pools at a time. Along with that, artificial pools for bathing tourists have been added.

It is said that Pamukkale has over a million visitors per year. Located close to the Mediterranean and Aegean sea, Pamukkale boasts of warm temperatures throughout the year. Although tourists do throng the place all year around, the best time to travel is usually springtime―April to mid-June. If spring is not a viable option, then autumn is another great choice―anywhere between mid-September to October. In the summer, the temperatures are known to soar above 40ºC, and it can be very uncomfortable to bear, leading to heat and sun strokes in some, whereas in the winter, the temperatures may sometimes drop to 0ºC, and there might be snowing, which only eliminates your chances of bathing in the spas.

The more you read about this site, the more fascinating it gets, and a visit to Turkey takes up a fairly higher position on that travel bucket list, does it not? We will leave you to the planning then, and to look at the breathtaking pictures of the Pamukkale site, one more time here, and then over and over again when you visit in person.