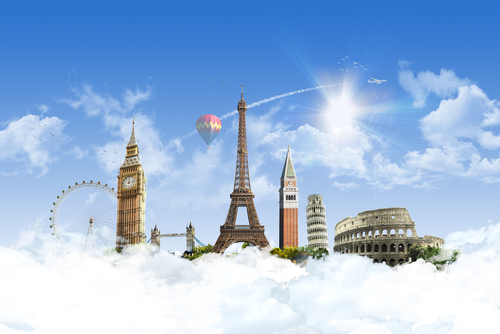 Comprising 50 countries, Europe has something to offer to every traveler. From breathtaking landscapes to royal castles, from snow-clad mountains to romantic beaches, this continent is full of wonders. One finds here a touch of the old-world charm in countries like Greece and Italy, to a modern feel in France and Germany. Art, music, literature, fashion, all come together in Europe and how!

♦ Geographically speaking, Europe extends to about 10,180,000 square kilometers on the Earth’s surface.
♦ The Arctic Ocean lies to the North of Europe, and the Atlantic Ocean lies on the western side. The Mediterranean Sea lies to the South of Europe, and the Caucasus Mountains and the Black Sea lie on the southeast.
♦ Europe is divided from Asia on the east by the Ural Mountains and the Ural River, as well as the Caspian Sea. However, this division is not globally accepted, which can lead to confusion when it comes to listing the countries in any one continent. Countries such as Turkey and Russia geographically lie on both continents, and countries such as Cyprus, Kazakhstan, Georgia, Armenia, Azerbaijan are considered either European or Asian, depending on the context. All six of these countries are generally considered geographically Asian and politically European, but this convention may not always be followed.
♦ The flag of the European Union (EU) and the Council of Europe (CoE) is made up of a circle of 12 yellow stars highlighted on an azure background. This flag was created in 1955, for the CoE, and was adopted by the EU (then known as the European Economic Community) in 1985. It has become a popular representation of all things European, including the Eurozone, but technically it only represents the EU and the CoE.

♦ European countries experience varied climatic conditions. In general, the weather here is quite unpredictable. Most countries are subjected to a harsh winter while summers are hot, but not unbearable. It rains very frequently in the United Kingdom.
♦ The contribution of this continent to the fields of music, literature, fashion, science, and philosophy is remarkable. Almost every important invention or discovery in the history of mankind has either been made or popularized by Europeans.
♦ Russia is the continent’s largest country, while Vatican city is the smallest.
♦ The Phoenician princess, Europa, is said to have been the origin for the continent’s name.

♦ No deserts are found in Europe.
♦ The most populous urban area in this continent is France’s capital, Paris, but the most populous city is Istanbul.
♦ Europe is a culinary delight. One finds a great diversity in cuisines here. Several universally popular recipes and ingredients, such as pizza, pasta, mayonnaise, sandwiches, etc., were invented in Europe. It is also a hotbed of chocolate and cheese production.

♦ The great symbol of the USA, the Statue of Liberty, was originally constructed in France, and later presented to the United States as a gift.
♦ The well-known London Eye is Europe’s tallest Ferris wheel.
♦ Europe is home to a population of 857 million people (2011).

♦ The continent is known to have one of the lowest fertility rates.
♦ Standing tall at 320 meters (1,050 ft), the Eiffel Tower in Paris has become immensely popular all over the world. In fact, this monument is the most-visited paid one in the world.
♦ Europe has carved a niche for itself even in the celebration of festivals and special events. The Oktoberfest, which is held in Germany; the Cannes Film Festival, which is held in France, and the La Tomatina festival in Spain are some that need no introduction.

Very few places offer the diversity that Europe does. So whether you are fascinated by the history of the Colosseum in Rome or the Gaudi construction in Barcelona, or you want to take in the beautiful sight of the majestic Mont Blanc, or you want to ski in some of the best ski resorts in the world, Europe is the destination for you.