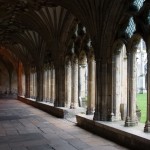 South-East England is the main economic powerhouse of the country and is the most populated of the English regions. The region holds a lot of interest to travelers, from landscapes to historical towns and cities.

Kent was originally one of the kingdoms of the Jutes,  it has been the point for invasion attempts, and is traditionally the major embarkment point for travel to mainland Europe.   Kent is known as the “Garden of England“,  because of it”s extensive agriculture, orchards and hop farms,

Canterbury is a cathedral and university city in the county of Kent.   Canterbury Cathedral is the seat of the Archbishop of Canterbury, Primate of All England and the “primus inter pares” of the primates of each national church in the Anglican Communion and the spiritual leader and senior clergyman of the Church of England.

Image courtesy of colart at freeimages.com

Canterbury is a major tourist center it has many ancient buildings, and modern building development within the medieval town center and is regulated by officials.

As a result of the murder of Thomas Becket in 1170, Canterbury became a major center of pilgrimage, the backdrop of Geoffrey Chaucer’s Canterbury Tales, written in 1387, about pilgrims passing the time by sharing stories.    There is a museum in Canterbury about the Tales.

The Museums are as follows:

“Canterbury was founded as the Romano-Celtic town of Durovernum Cantiacorum.    In the early Middle Ages, the city became known by the Anglo-Saxon name of Cantwarebyrig, means “fortress of the men of Kent”.”

“People who have proof that they live nearby can get into some museums/cathedrals for free, check with the venue first.”

Where can you go when you’re hungry?  Try the following:

If you’re a drinking person and like to go to bars, in English Pubs, try these:

I have been to most of these restaurants and bars.  I found the food to be better than the States and the beer is real-ale and brewed locally.  If you’re traveling for the food and drink alone it is well worth it.

Now where do I stay.  I personally prefer Hostels/Pensions, not only because they are cheaper but also because you meet some wonderful people that become your friends for life.

Featured Introduction Photo on top courtesy of obyvatel at freeimages.com